This was the only miniature I painted for my Mom and was done in 2007. 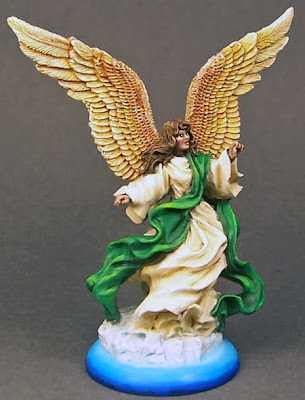 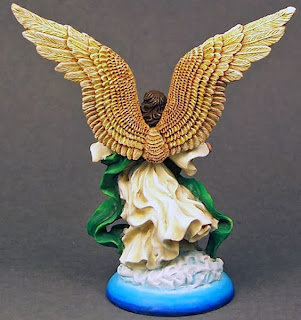 Tuesday has arrived again--unfortunately, I was able to get precious little painting in this week.  The Figure Painter Magazine dropped earlier this week and work kept me pretty busy along with a quick trip out of town to visit family.

Ugh.  Freehand is hard.  Definitely not my forte, but something I want to get better on--so the only way to do that is get out the brush and do it. The additions are quite early on yet.  I've sketching in the trim everywhere I am going to put it.  The majority of it is just basecoated.  The back of the sleeve of the raised arm is the farthest along.  The idea was (is) to fleur-de-lys along on trim, but at this point it looks like three spikey points...I've got a little shading/highlighting started on the back sleeve.  I've been a bit frustrated so far on the sleeve because the fleur-de-lys pattern looks bad and on top of that, I fussed too much with the paint and it has gotten rough.  We'll see how she progresses. 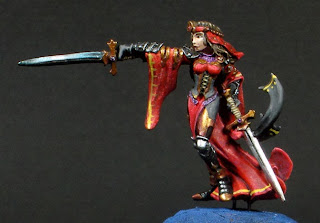 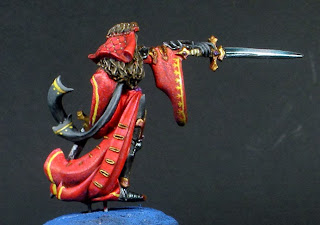 Happy Tuesday, everyone.  Just barely Tuesday, but Tuesday nevertheless at least in my time zone! I finished up the cultist, adding the weathering pigments and some blood splatter along with a few touch ups.  The base is plain, since the recipient will be basing it on his own. 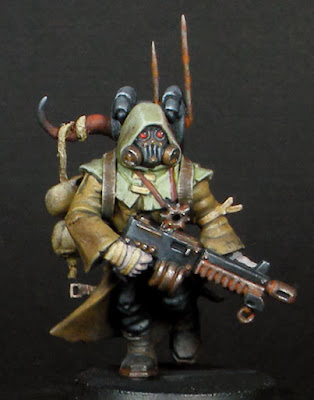 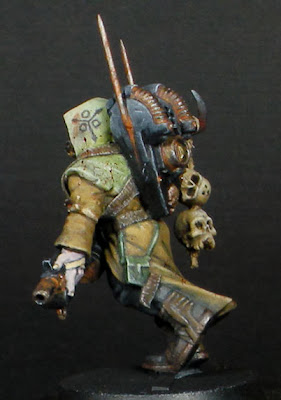 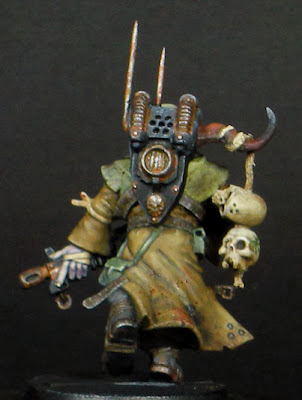 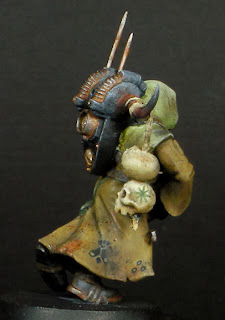 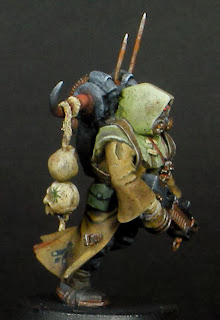 I have started back upon Kristianna, but the first sketching for the freehand are...uhhh...rough.  Not pleased at all with it at the point, bit hopefully with some patience, I can get it more to my liking.  Depending on how things go, I'll finish her up this week and move on to the next project.  I'm starting to get the itch for another display base, so I anticipate that will be next on the docket.  Have a good week!

Ahh, one more thing.  I created a Facebook page dedicated just to my miniature hobby--it's just another venue to display what I am working on at the moment.  The content will largely be identical to what is here, especially from the miniature standpoint.  I will probably keep any new tutorials here, along with the charity stuff and random musings.  Feel free to give me a like if you enjoy what you see.  The page is at https://www.facebook.com/pages/Jabberwocky-Miniatures/188327428038989
at 9:42 PM 4 comments:

Hello once more! I hope those of you on this side of the pond had a great Thanksgiving and survived Black Friday.  For the rest of the world, I hope you were able to participate in some of the online deals out there.

I wanting to say thanks to Demi Morgana for deciding to follow along--it's been a while since I've had a new follower.  I was beginning to think I was getting a little dull :) I've followed Demi for sometime on his blog, which began in 2010.  He's a fan of things old and rusted. :) He has some excellent tutorials on his site--check them out especially if you are looking for some comprehensive step by steps on display style bases and weathering.  He does some very detailed and excellent work! If you have a chance, go take a look at http://demimorgana.blogspot.com/

With the holiday, I was out of town visiting family, but returned on Friday evening and was able to put in some time on the cultist.  The sessions over the weekend were focused on cleaning up things here and there and putting the last bits of freehand on the model. I initially was going to have a yellow hook, but switched the hook from yellowish to a dark red with a fade to black on the tip.  I am waiting on the arrival of some pigment fixer along with some weathering pigments from Secret Weapon.  Once that gets here, I'll begin the home stretch will some weathering and finally the blood effects with TCR. 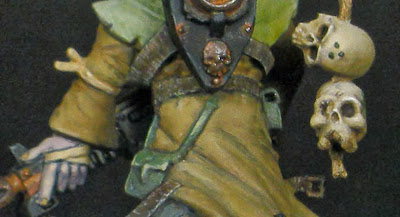 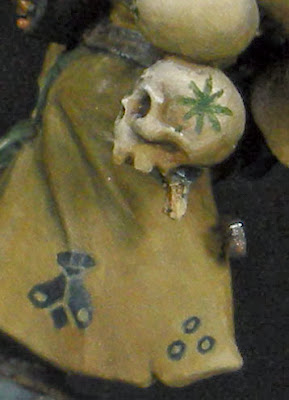 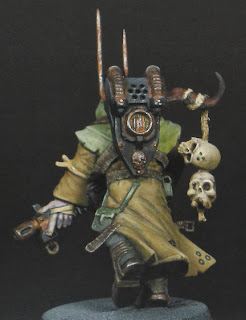 As planned, I was able to get some addition work done on the trench coat.  I continue to be frustrated by my photography on this guy, but I think you can tell that I did something on him :). This week I hope to get the skulls and hook done.  Then will come the fun part--weathering and some (hopefully) good looking freehand!  I'll be celebrating Thanksgiving with the family this week, but should get some time in to paint. 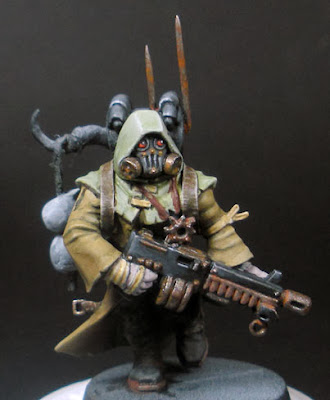 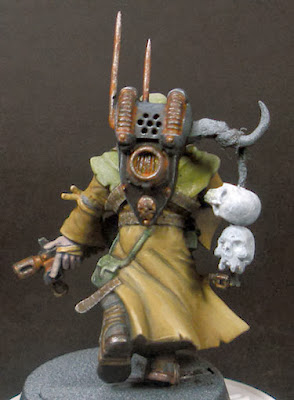 Cultist WIP #5 with a short tutorial

I hope everyone had a good week.  I've continued to plug away on the cultist.  I had a conversation with one of our local painter in facebook regarding rust, so I churned out a brief tutorial on how I was rusting the gun. First, the overall progress at this point: 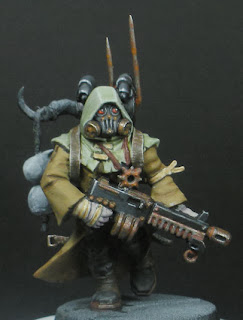 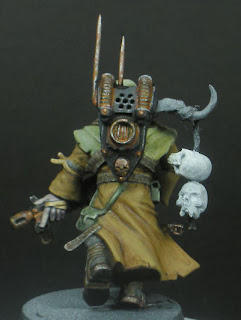 As you can see, the majority of the areas are blocked in, with various stages of completion.  The hook and the skulls are not started and, although it is hard to tell, the pants aren't either.  They are so overshadowed by the stance of the miniature as well as the coat, that I don't think it will matter too terribly much what color I choose.
For the rusting on the metallics, I did the basecoat in VMA Gunmetal. I really like the VMA metallics and they are my favorite silver/steel metallics of everything I've tried. Next step is a quick wash of the old GW Devlan Mud. I think if you were looking for something super quick and more of a well used metal, you could stop here. The first step in the rusting is RMS Dark Skin dabbed on randomly. I went pretty light with it here, but you could go heavier if you were doing an older rust. Next is the workhorse of the rust effect, RMS Rust Brown. Applied it again randomly and rather heavy, concentrating in the recessed areas. The following pic was some RMS Clear Orange with a little bit of the Rust Brown added to tone it down just a bit. Definitely could stop here for an older, less used look. The final pic it I reapplied the orange a little more and then gently went back and dry brushed a little of the VMC gunmetal again to simulate areas where the rust had been knocked off. All in all, it's a relatively quick process (at least for the speed at which I paint...). 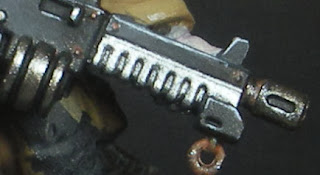 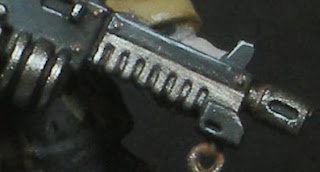 First and foremost, congratulations to all the winners at Monte San Savino over the weekend.  Rusto took the BoS this year.  I'm  looking forward to seeing the photos over the coming week.

This week was once again saw limited painting, but I got a nice start on the leather on the cultist and have done some weathering on the shoulder straps. 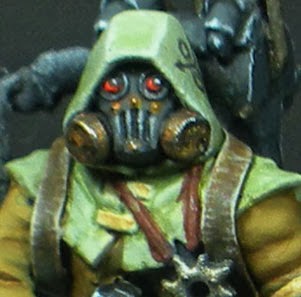